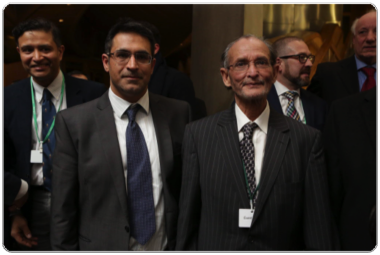 “EU Integration, Faith and Diversity in Scotland: A Shia Muslim Perspective” highlighted the Scottish Shia Muslim communities as social and humanitarian stakeholders, celebrated Scotland’s renowned religious and cultural diversity, and sought to strengthen the societal integration of the Shia Muslims, and wider society, within Scotland, the UK and EU member states.

The event was attended by IMI’s Global President, Dr. Shabih Zaidi and IMI Europe Coordinator, Dr. Mehdi Ali as well as VIPs representing the widest cross-section of Scottish Civic and Religious Society, Churches of all denominations, Christian, Jewish, Muslim and other faith and no-faith communities, consul generals from the diplomatic corps, as well as governmental officials and parliamentarians, deputations from all the Armed Services and the Police, Fire and Health Services, European Commission and EU parliamentary office representation, executives of healthcare charities, commercial and cultural organizations, UN accredited bodies, academics, civic and religious leaders, and representation from the Shia Muslim congregations of Glasgow, Edinburgh, Aberdeen and Dundee.

Are you going - to join event ?

IMI Europe was formed in 2010 with the intention of streamlining assistance as well as ensuring outreach to the wider European continent.

After many months of hard work following up from the IMI Iraq Initiative and years of thoughtful consideration, IMI officially formed a new chapter in Iraq in December 2009.

IMI East Africa, formerly IMI Tanzania, has been enhanced to include regional membership to extend the benefits of the chapter's activities.

IMI New Zealand launched in January 2013 under the leadership of Dr. Adnan Ali.

Under the leadership of Dr. Mubarak Naqvi, IMI India is reorganizing for a stronger national presence.

IMI UK is a national platform through which doctors and allied health professionals network and get involved with projects for the betterment of our community in the UK and around the world.

IMI has been active in Pakistan since 1994. Despite the increasingly chaotic security situation, IMI Pakistan is continuing to operate in Karachi and throughout different parts of Pakistan.