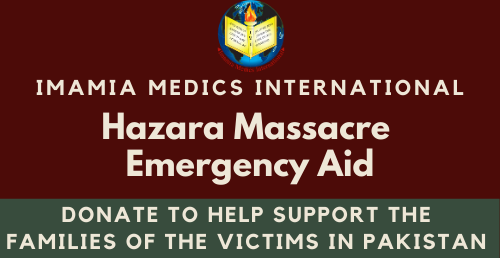 Among the most vulnerable of Pakistan's ethnic and religious minorities is the sizeable Shia Hazara population. Hazaras are an ethnic group predominantly based in Afghanistan, but also with a large population in Pakistan, with estimates of this group ranging from 650,000 to 900,000. The majority of Hazaras in Pakistan, approximately 500,000, live in the city of Quetta, the provincial capital of Baluchistan.  As both an ethnic and religious minority, Hazaras face intersectional discrimination.

The situation for our Hazara brothers and sisters in Pakistan is particularly serious, as highlighted by the series of bomb blasts around Alamdar Road in January 2013 which killed 126 members of the community, and a number of violent attacks thereafter which include major attacks on the Hazara community including the January 2013 Quetta bombings, February 2013 Quetta bombing, Hazara Pilgrims carnage, 2016 Dehmazang bombings, 2020 maternity hospital attack (dashte Barchi) and Bamyan Bombing. Most recently, 11 innocent lives were taken, as a group of men from Balochistan were kidnapped and  killed mercilessly.

Help IMI support the families of the victims of the attack on Hazara miners in Machh Town in Balochistan, Pakistan.

View our Statement of Condemnation from our IMI UN Desk below:

Imamia Medics International stands with our Hazara brothers and sisters in the wake of targeted killings in Pakistan by Takfiri elements. We offer our condolences and vehemently condemn the senseless killings of eleven miners from Balochistan's Mach area.

In offering our condolences, we reaffirm our commitment to our three-decade-long work in advocacy and rehabilitation for Shias who remain victims of terrorist activities across the world. The crisis of targeted killings in Pakistan remain one of the most tragic human rights abuses faced by the country's most vulnerable communities in recent history. IMI remains committed to providing our services to victims and survivors of anti-Shia violence in Pakistan, including emergency and continuing medical care, educational support and our advocacy work.

Help IMI support the families of the victims of the attack on Hazara miners in Machh Town in Balochistan, Pakistan. IMI has teams on the ground who will work to provide educational aid for the children of Hazara Shaheeds.